Where is the Brac Island?

Location and brief history of Brac

Brač is the largest island in Dalmatia, and the third largest in the Adriatic. It is separated from the mainland by the Brač Channel, which is 5 to 13 km wide. The island’s tallest peak, Vidova gora, stands at 780 m, making it the highest island point of the Adriatic islands.

Brač si not densely populated, it has several towns and villages, and a dramatic landscape of steep cliffs, inky waters and pine forests. The interior is scattered with piles of rocks – the result of the back-breaking labour of women who, over hundreds of years, gathered the rocks to clear land for vineyards and orchards. The two main centres, Supetar and Bol, are quite different – Supetar is pleasant, but low key with a casual vibe, while Bol has a more exclusive appeal.

Remnants of a neolithic settlement have been found in Kopačina cave near Supetar, but the first inhabitants to make the historical record were the Illyrians, who built a fort in Škrip to protect against Greek invasion. The Romans arrived in 167 BC and promptly set to work exploiting the stone quarries near Škrip and building summer mansions around the island. From the 11th century, control of the island was passed between many local powers such as Venice, Byzantium, Hungary, Croatia, Dubrovnik and, until finally, Venice ruled for a longer period of time from 1420 until 1797. During this time the interior villages were devastated by the plague and the inhabitants moved to the ‘healthier’ settlements along the coast, revitalising the towns of Supetar, Bol, Sumartin and Milna. The interior has remained largely unpopulated until today as most activity is reserved for the coast.

After a brief period under Napoleonic rule, the island passed into Austrian hands. Wine cultivation expanded until an epidemic at the turn of the 20th century ravaged the island’s vines and people began leaving for the Americas, especially Chile.

However, in recent times Brač has seen a return to traditional wine making and cultivating local varieties of wine. After much historical turmoil the island has shifted its focus to tourism and has been prospering since.

Unlike most other Dalmatian islands, the sights on Brač are scattered arount the island with Supetar and Bol being good starting points and main hubs of social activity.

Supetar became the island’s official centre in 1827. The town includes Supetar itself and the three villages: Splitska, Škrip and Mirca. The present settlement of Supetar was founded in the 16th century when people living in Nerežišča, about 8 kilometres inland, began to use it as their harbour. The town’s main period of development occurred during the 18th and 19th centuries when Supetar took over from Nerežišča as the administrative centre of the island of Brač. It is the largest settlement on the island and the economic, cultural and touristic center which is home to one fifth of the population of Brač. The  17th century church of the Annunciation was built in the remains of an earlier early Christian church of Saint Peter. A mosaic remains in the church’s interior as evidence of its venerable history. It is located on the main town square and is a beautiful example of masterful Dalmatian masonry. 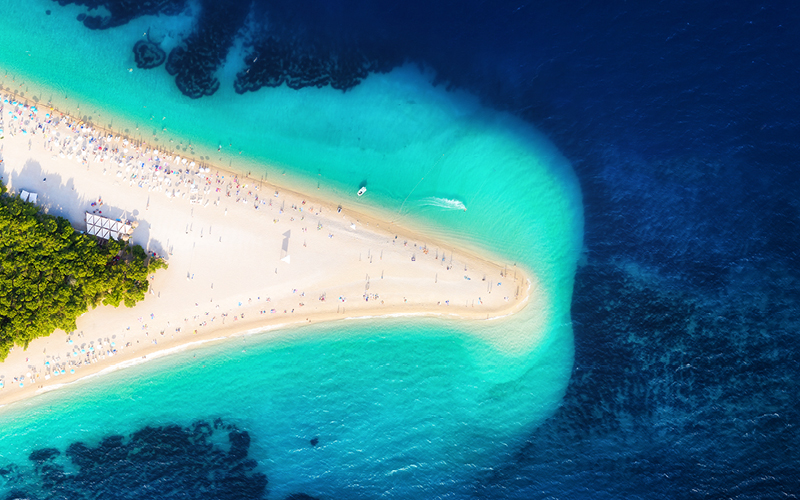 Bol is renowned for its most popular beach, the Zlatni Rat (Eng. golden cape). Croatia’s most photographed beach extends like a tongue into the sea for about 400 m. It’s made of mostly smooth pebble rock that visibly moves with the tidal movement giving the cape an ever-shifting appearance. The Adriatic Sea at Zlatni Rat is clear and somewhat cold, due to the strong current of the strait it is situated in. Despite the hype and constant crowds, the golden cape is a gorgeous place. Pine trees provide shade and rocky cliffs rise sharply behind it, making the setting one of the loveliest in Dalmatia. The location of the cape makes it ideal for wind surfing and attracts many water-sport enthusiasts. There is a beach on either side of the tip of Zlatni rat with a small nudist section immediately west of the cape.

Bol itself fascinates with crystal clear water, wonderful nature and the virgin beauty of the stony island houses the Croatian poet Tin Ujević sang about. This little town has kept its Mediterranean spirit, he narrow, stony little roads and the wide piazzetas are simple and in typical Dalmatian fashion – quite noisy. It is a popular destination on the island, full of harbourside bars and restaurants, and events in the summer months. 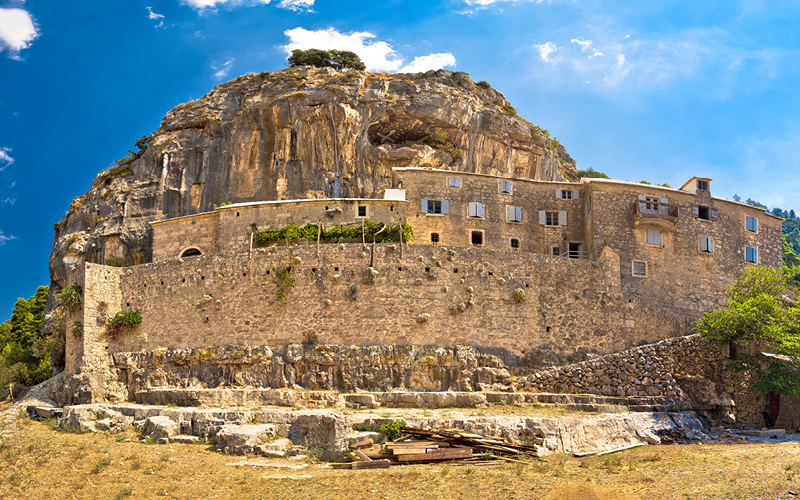 Contrary to the busy and sporty feel of Zlatni rat, Brač also offer contemplative retreat for weary travelers and an unique experience in Blaca Hermitage. It is a remote monastery on the southern side of the island that has remained largely intact for centuries.

Things can’t have looked too different on the approach to this remote mountain cleft when a small group of priests and their servants, on the run from the Ottoman Turks on the mainland, arrived here in 1551. They initially took shelter in a cave (the walls of which are still visible in the kitchen) and built out from there. You can now take an informative 30-minute tour of the complex, which is full of original furniture, tools and rare manuscripts.

By the 18th century the hermitage ministered to three remote villages, with the priests operating a school from one of the rooms. The school closed in 1963 with the death of the hermitage’s last resident priest, the extraordinary friar Nikola Miličević, who was also a poet and an astronomer of international repute. The journey is a large part of the experience, involving a rough drive along a narrow, unsealed road and then a 2.5 km walk down a steep path. Make sure to pack good shoes! The turnoff is well signposted from the main road southeast of Nerežišća; it’s the same turnoff as for the Vidova Gora lookout, and the two can easily be combined into one trip. 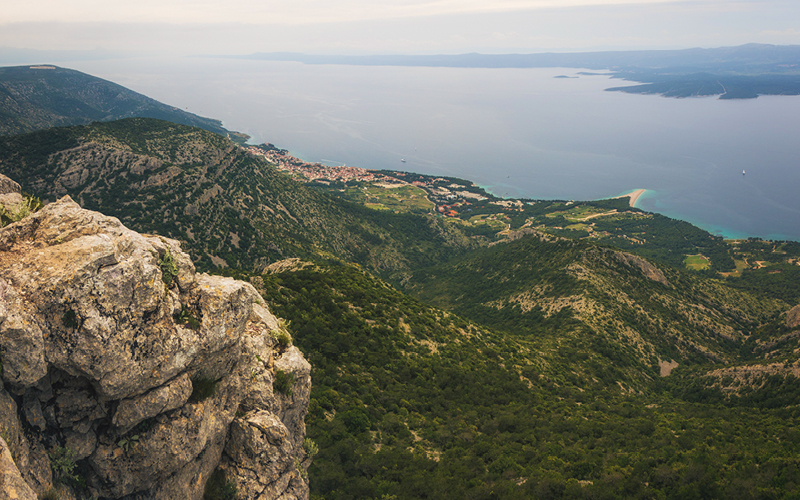 If the Blaca Hermitage is a trip down a steep path, then Vidova Gora is an opportunity for adventure in the opposite direction. At 778 m, Vidova Gora is the highest point any Adriatic Islands and the view from the top is astounding. From here the entire island of Hvar is spread out like a map, with Vis and the mountains of the Pelješac Peninsula and Biokovo filling the horizon. It’s easily reached by a good sealed road through a pine forest (look for the turnoff southeast of Nerežišća) or sweat your way up from Bol on foot. The trip should take around two hours. If you’re feeling even more adventurous, you can rent a mountain bike in one of the towns and make your way to the top.

All in all, Brač is an island best explored by sailing as its many treasures and spread around its glorious coastline. Hopping from one destination to another gives you the best opportunity to enjoy its beautiful nature, scenic views, cultural heritage and much more. Like most Dalmatian islands, the fresh seafood and wine is a must-try when visiting and the local fisherman’s feasts are the perfect place to try both!

Where to Sail & anchor around Brac Island