Where is the Island of Korcula?

Location and brief history of Korcula

The island of Korčula is the sixth-largest island in the Croatian Adriatic. Abundant with vineyards, olive groves and picturesque little villages, it stretches nearly 47 kilometers in length.

It boasts one of the most beautiful and well-preserved renaissance old towns and many pristine nature spots for enjoying the outdoors. Dense pine forests led the original Greek settlers to call the island Korkyra Melaina (Black Corfu).

Quiet coves and small sandy beaches dot the steep southern coast while the northern shore is flatter and has pebbled beaches.

The earliest remains of settlement on the island go back to the Neolithic period as evidenced by the archeological cave site Vela Spila located near Vela Luka, on the island’s western end.

The findings at Vela Spila are on display at the Center for Culture in Vela Luka. The fate of these prehistoric peoples is not known but the sites do provide a window into their way of life.

However, it was the Greeks who first began spreading over the island sometime around the 6th century BC.

According to legend, the island was founded by Trojan hero Antenor in the 12th century BC. The most significant Greek settlement was founded in the area of today’s Lumbarda around the 3rd century BC. A stone inscription found in Lumbarda, the oldest written stone monument in Croatia, records that Greek settlers from Issa (Vis Island) founded the colony and that the two communities lived peacefully until the Illyrian Wars around 220 BC with the Romans.

Greek artifacts, including carved marble tombstones can be found at the local Korčula town museum.

Rome conquered Korčula in the 1st century, giving way to the Byzantines in the 6th and Slavs in the 7th century. After the turn of the first millennium, the island passed through the hands of various medieval states before falling to the Venetians in 1420, who remained in power until 1797.

Under Venetian control the island became known for its exquisite stone, which was quarried and cut for export. It was used to build many significant public monuments and buildings in Renaissance Venice and the Republic of Dubrovnik. Shipbuilding also flourished in this period and Korčula’s shipmasters were well known across the Mediterranean.

After the Napoleonic conquest of Venice in 1797, Korčula’s fortunes followed those of the region, changing hands among the French, British, Austro-Hungarians and Italians before becoming a part of the first Yugoslavia in 1921. Today Korčula is one of Croatia’s most prosperous islands, its historic capital drawing more and more visitors each year.

The City of Korcula 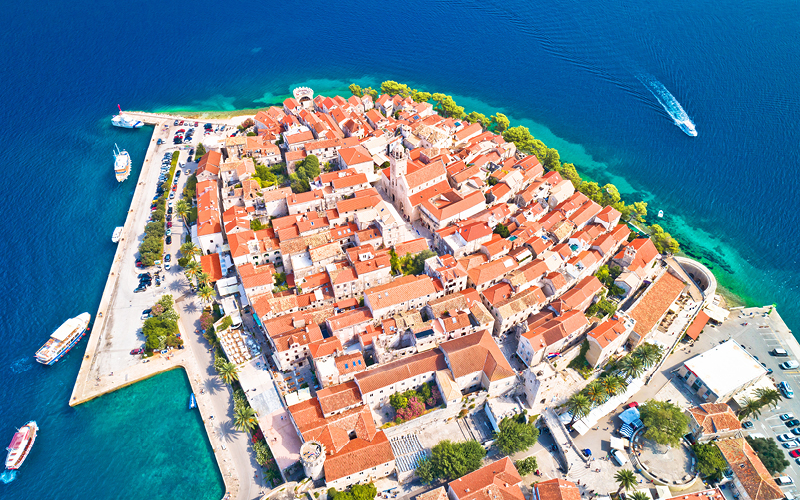 With an equally impressive and glorious old town, its architectural beauty and rich cultural heritage are a treat for anyone visiting the island. The city has a fascinating fishbone layout that was ingeniously designed for the comfort and safety of its inhabitants.

One of the most impressive Renaissance buildings in the very center of Korčula’s old town is Saint Mark’s Cathedral which was built in the 15th and 16th centuries, and has a statue of Saint Mark above its entrance with figures of Adam and Eve on either side.

If you venture inside the Cathedral, there is an elaborate ciborium over the main altar by Marko Andrijić, a gifted local stonemason. Below lies a restored piece by renowned Italian renaissance master Tintoretto.

For a different take on local culture, make sure to watch the Moreška sword dance. Meaning “Moorish” in Croatian, the dance used to depict the battle between the Moors and the Christians.

However, the dance was reinterpreted in recent times to represent a battle between the White King and his followers and the Black King, who has kidnapped the bride of the White King. The two leaders’ armies meet to battle, accompanied by music, until the Black King surrenders. Performed weekly during summer, the show is well worth catching. 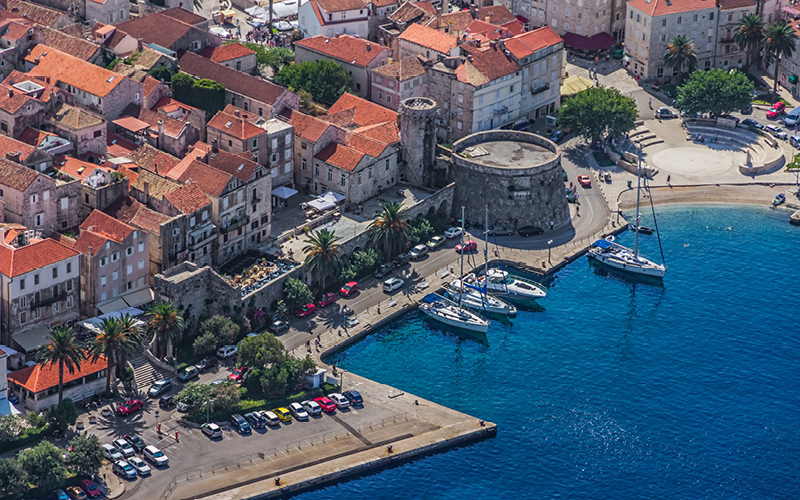 If you stay in the harbor nestled by the city, you are an easy walk away from numerous small beaches during the day, and many bistros and cocktail bars at night.

The gastronomical scene in Korčula is amazing with many restaurants offering fresh local seafood paired with some of the finest wines grown on Korčula like Pošip or Grk. As of 2019, the city is also host to a Michelin star restaurant.

The Lešić Dimitri Palace in-house restaurant is located at the northeastern side of the old town. For a truly unique experience, sail up to the small island of Stupe located east of Badija Island. This seasonal restaurant is only accessible by boat and is situated on a tiny island in the Pelješac Bay. Its location offers a truly unique dining experience with a spectacular view of the Korčula area.

The tradition of cultivating wine on Korčula and the near by Pelješac Peninsula is a long one. Stopping in almost any village or town will provide an opportunity to try these regional varieties paired with flavorful local delicacies such as prosciutto, cheese and cured olives. Our advice is to try them all! 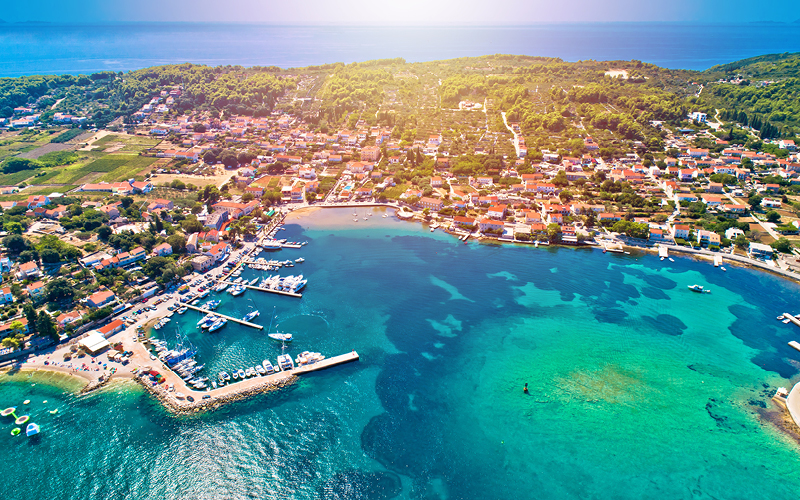 Lumbarda is a laid-back sort of town set around a harbour on the southeastern end of Korčula Island. The sandy soil is perfect for vineyards, and wine from the Grk grape is Lumbarda’s most famous product.

This unique dry white wine variety flourishes in the sandy soil of Lumbarda and can’t be grown successfully anywhere else.

In the 16th century, aristocrats from Korčula built summer houses here, and it remains a quieter retreat from the more urbanised Korčula Town.

The town beaches are small but sandy and surrounded by tall reeds that provide for idyllic summer backdrops.

Pržina is the most popular beach in Lumbarda. Secluded and shielded from any harsh wind, Pržina is an ideal place for a day trip. Locals and visitors in-the-know swarm to this sandy stretch for safe swimming and sandcastle construction, and to hang out in the little cafe-bars. It’s an ideal spot for an afternoon cocktail while admiring the sunset. 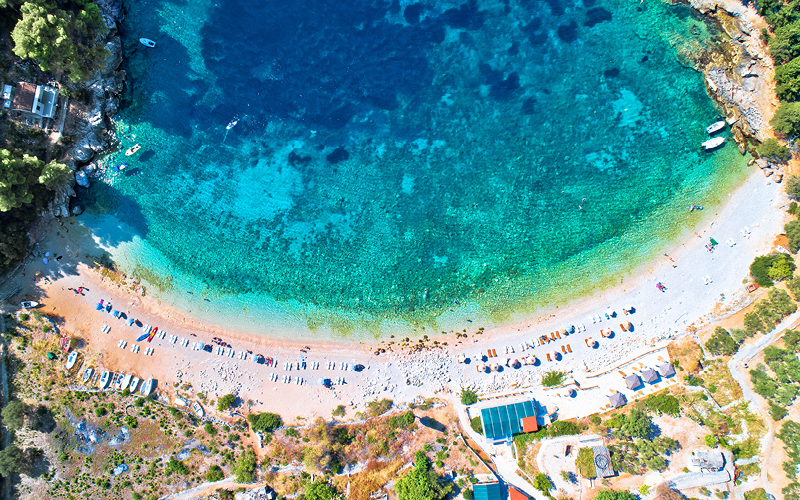 Sailing around Korčula is well worth the effort as the island provides for some beautiful scenery and bathing spots.

If you venture further west from Lumbarda you will encounter the village of Pupnat. Open towards the open sea and Lastovo, Pupnat is a typical wine and vegetable-growing community set at the side of a small but fertile plain.

To the south of Pupnat at the bottom of a steep slope is Pupnatska Luka, once the village’s port. Best accessible by boat, Pupnatska Luka is a beautiful crescent of fine pebble, and is arguably the best of Korčula’s south-coast beaches.

There are a couple of café bars offering snacks at the back of the beach, screened by outsized cacti. 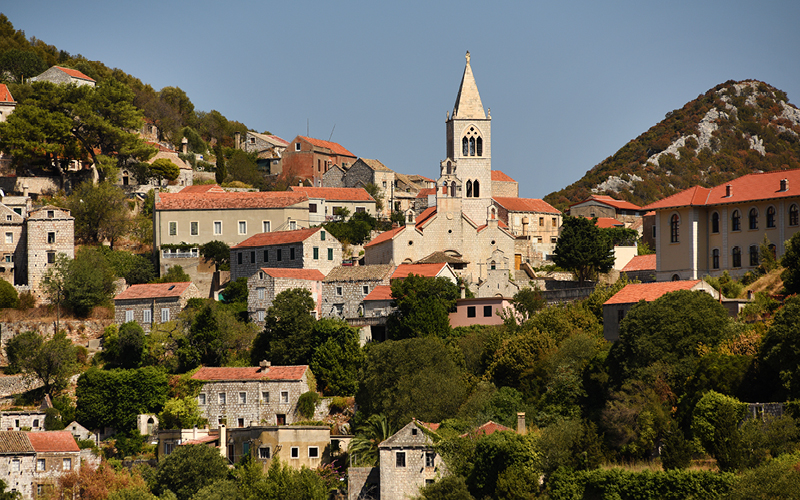 One of the great benefits of sailing in Croatia is the flexibility to visit many different spots. When visiting Korčula, a quick stop at Lastovsko Archipelago Nature Park is something that should not be missed.

Yachties and sailors clued-in to the hidden gems of Croatia have been flocking here for years to enjoy the undisturbed nature and pristine waters of Lastovo.

One of the most remote and undeveloped of Croatia’s populated islands, little green Lastovo sits in quiet isolation south of Korčula and west of Mljet.

There is little to do on land, but the island and dozens of islets that surround it offer many tiny bays for mooring and enjoying the blissful beauty of nature.

Make sure to bring your snorkeling equipment or stand up paddle for exploring the turquoise waters. Come night fall, divert your gaze up at the stars. Due to the its remote location and lack of light pollution, the night sky at Lastovo is one of the most clear and beautiful sights you can hope to encounter. 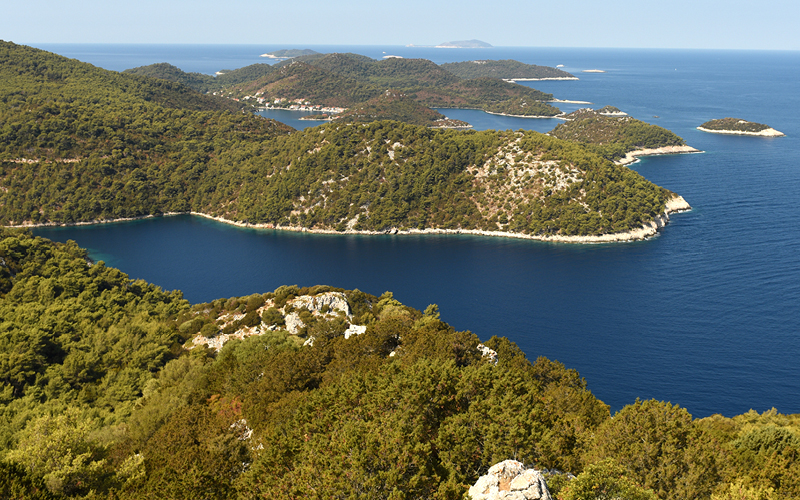 Where to Sail & anchor around Korcula Island

END_OF_DOCUMENT_TOKEN_TO_BE_REPLACED 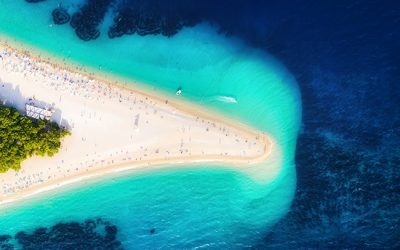 Brač is the largest island in Dalmatia, and the third largest in the Adriatic. It is separated from the mainland by the Brač Channel, which is 5 to 13 km wide.