Where is Hvar Island?

Location and brief history of Hvar

Hvar is an island in the Adriatic Sea, located off the Dalmatian coast, lying between the islands of Brač, Vis and Korčula.

The climate is characterized by mild winters, and warm summers with many hours of sunshine.

Hvar’s location at the center of the Adriatic sailing routes has long made this island an important base for commanding trade up and down the Adriatic, across to Italy and throughout the wider Mediterranean.

It has been inhabited since pre-historic times, originally by a Neolithic people and later by the Illyrians.

The ancient Greeks founded the colony of Pharos in 384 BC on the site of today’s Stari Grad, making it one of the oldest towns in Europe.

They were also responsible for setting out the agricultural field divisions of the Stari Grad Plain, now a UNESCO World Heritage Site.

In medieval times, the City of Hvar rose to importance within the Venetian Empire as a major naval base. Prosperity brought culture and the arts, with one of the first public theatres in Europe, nobles’ palaces and many fine communal buildings.
The 16th century was an unsettled time, resulting in some unusual fortified buildings on the northern shore to protect the local population.

After a brief time under Napoleonic rule, the island became part of the Austrian Empire, a more peaceful and prosperous time. On the coast, harbours were expanded, quays built, fishing and boat building businesses grew.

At the same time, the island’s wine exports increased, along with lavender and rosemary production for the French perfume industry.

However, the 20th century and contemporary times have ushered a new focus for the lives of the islanders – tourism.

The island is versitile and offer numerous options for exploration, relaxation and hedonism. Due to its many must-see places, the island is best explored while sailing.

The City of Hvar 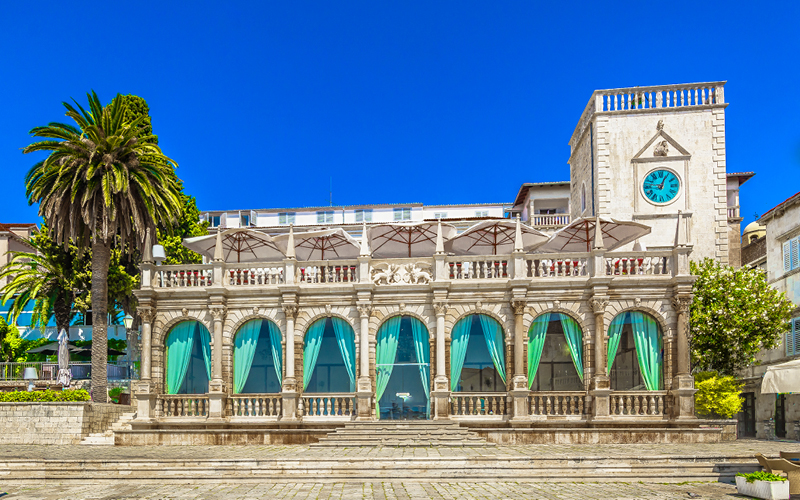 The most popular of all the towns on the island, Hvar is the hub of social activities and most popular with younger visitors.

The city has a rich history and is abundant in both cultural sights and opportunities for fine dining.

The focal point of the city is the central square or Piazza which is the largest square in Dalmatia. Originally, it was a deep bay which was filled with rocks for centuries until it got its current dimensions.

Essentially, it was a space connecting two fortified cities: Groda in the north and Burg in the south. By the 15th century the square was formed with the cathedral in the east and the sea in the west. The communal well in the center of the Piazza dates from 1529 and the square remains the hub of the city and a gathering place for both locals and tourists.

The square is lined with numerous small cafes and restaurants. 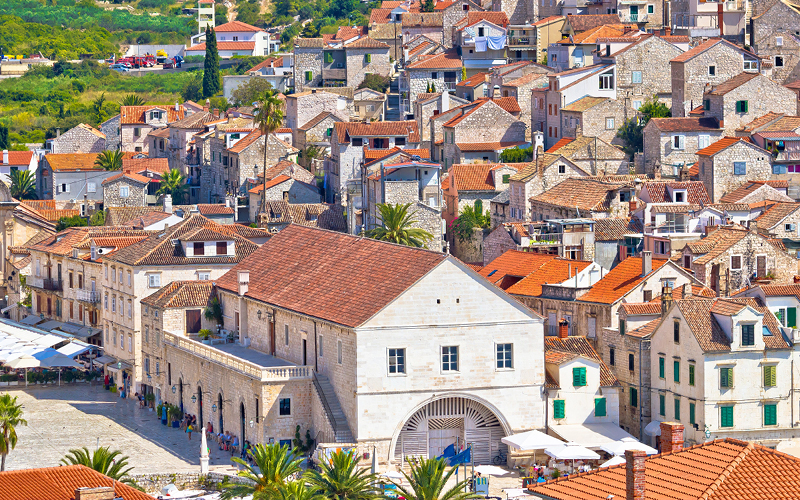 Located on the east end of the square is the Cathedral of St. Stephen I, pope and martyr. There was an earlier church on the site where the church of St. Stephen was erected and it became the cathedral in the 13th century when the seat of the diocese was moved from Stari Grad to Hvar.

The building is a triple-naved basilica with a square shrine and renaissance choir stalls. The cathedral has a late Renaissance trefoil facade which symbolizes the Holy Trinity.

The bell tower on the north was completed in 1550. The church itself is a beautiful piece of both gothic and renaissance heritage and its altars are adorned with paintings by Venetian masters.

The cathedral is open to the public and its art collection is a must-see when visiting the city.

Right off the square to the northeast, the City Lodge of Hvar is situated. It was first mentioned in 1289 but the current building is a classic late renaissance building started in the 15th century and completed in the 16th century.

It burnt down during the Turkish invasion in 1571 but was later rebuilt and renovated. It was the administrative center of the city and was even used as a public courthouse during Venetian rule.

During the Venetian rule the lodge was used as a public courthouse.

In later times is was the heart of social life of the island’s wealthier inhabitants.

On the opposite side of the square to the southeast is the Arsenal or storage facility. It was first built between 1292 and 1331 and it was used as a shipyard for galleys.

It went through numerous renovations and in 1612 a big terrace was added which would serve as an entrance to the newly founded theater.

The theater in the Arsenal is the first public theatre in Europe.

The auditorium dated to 1803 when the Theatre Society was founded. It was since renovated and its present neo-Baroque appearance dates back to the middle of the 19th century.

The theater still operated today as a place for cultural events and also hosts the Contemporary Art Gallery which is open to the public year-round.

Docking in the City Port can be quite expensive, so most visitors choose to dock in Palmižana, a near-by sailing-friendly island, and commute to Hvar by a regular water taxi service.

The small island of Palmižana is beautiful and worth a visit in its own right. 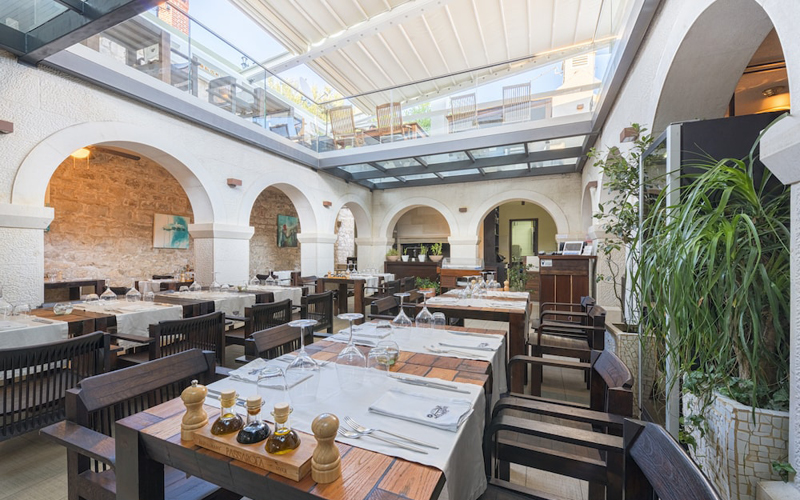 We advise you to become a part of our Sailing Lovers Club and get a chance to get a 15% discount in “Passarola”, a fabulous restaurant located in the city centre.

Palmižana is the popular name for the small island of St. Clement. It is one of many islands in the unique Paklinski archipelago renowned for its beauty.

The ACI marina Palmižana is located on the northeastern coast of the island and is located only 2.5 nautical miles from Hvar. Palmižana is the ideal retreat for all who wish to escape from the bustle of city life.

At this popular boating destination, you can experience a relaxed and carefree holiday in a unique atmosphere of harmony with nature.

Only a short 10-minute walk from the Marina, the very unique and beautiful Meneghello Place is located. It is a restaurant, botanical garden and home to an art collection of contemporary Croatian artists.

Its lush tropical garden hosts a rich botanical collection including a hundred-year old pine forest, exotic trees with beautiful flowers, fragrant and aromatic bushes, palm trees, yuccas, agaves, aloes and much more. It is a great place to explore and well worth the walk. The island has many pathways which provide opportunities for scenic walks to enjoy all of its natural beauty.

If you have a chance we recommend lunch or dinner at the fabulous restaurant “Patak”. Accessible exclusively by sea the restaurant offers stunning views, untouched nature and superb fish & other local specialties.

Also grab a chance to try one of their fantastic cocktails. 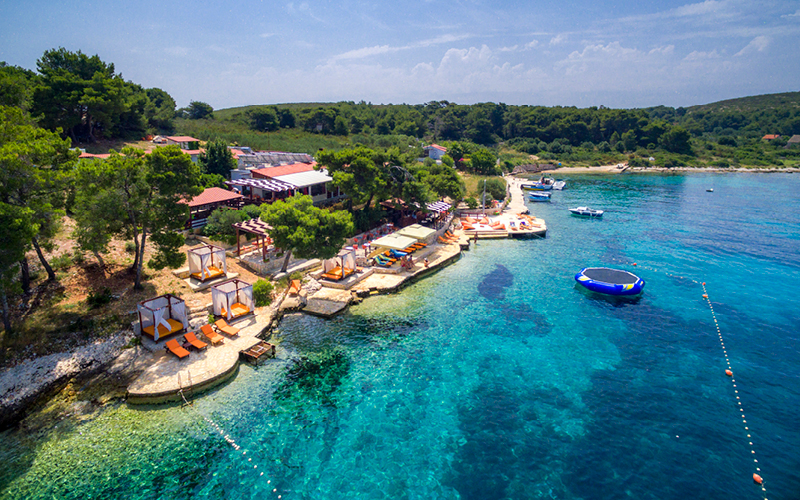 Become a member of our Sailing Lovers Club and get up to an exclusive 10% off your lunch or dinner.

The ancient city of Faros, today’s Stari Grad was the first Greek settlement built on the island of Hvar and boasts a 2400-year-old history. It’s the perfect place to visit for a more relaxed pace with the added commodities of being in a city.

The marina is located near the main city square where many music and cultural events are hosted during the summer months. The must-see summerhouse Tvrdalj of renaissance poet Petar Hektorović is located right on the square and open to visitors year-round.

The poet built it throughout his entire life and it had the same importance for him as his literary work. There he realized the idea of a microcosm – a small, enclosed world where all divine creatures – fish, birds, herbs and people had a space to live.

An absolute must-see when visiting the city is the Stari Grad Plain, a UNESCO World Heritage Site. The large plain occupies the island’ s central area and has sustained the life on the island for thousands of years.

The Plain is in fact a cultured landscape, formed by thousands of years of human labor. Its ancient man-made features originate from 24 centuries ago when Greek colonists divided the Plain into rectangular plots, each fenced in with drywall.

The traditional drywalls, preserved as part of the UNESCO Intangible Cultural Heritage, are present all over Dalmatia and still built today by local craftsman. 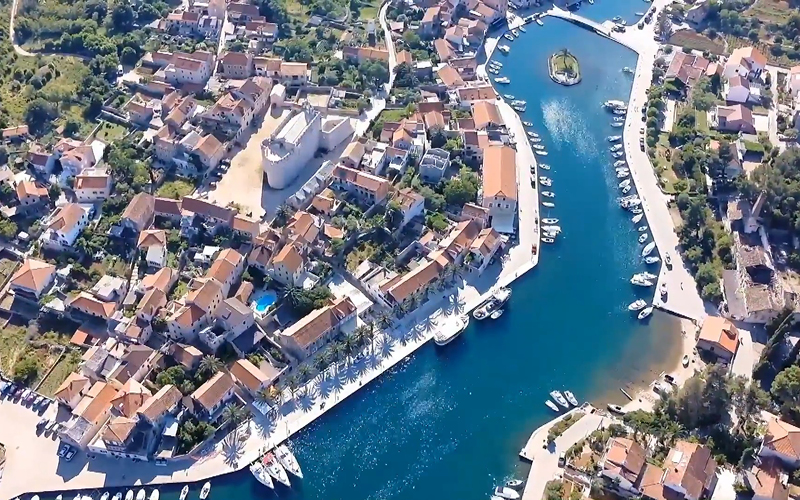 Vrboska is one of the picturesque localities on the island of Hvar. It is situated at the bottom of a deep and well-protected inlet. The isle in the middle of the inlet and the old stone bridges connecting the two shores of the bay have earned this village its nickname of “little Venice”.

One of the most unique things one can experience in Vrboska is its exquisite renaissance art collection. Most notably, the polyptych by Paolo Veronese is kept in the parish church of St. Lawrence.

The church was built in the 15th century and thereafter extended twice, with the current appearance dating from the 17th century. The parish church was looted and burnt down in both the Venetian and Turkish attacks.

Regardless of this, it houses one of the wealthiest painting collections in Dalmatia, especially when the quantity and quality of its works of art is correlated to the size of the locality and its population.

Another interesting part of local history which can be explored in Vrboska is the fishing culture of Hvar. The Fishing Museum hosts numerous traditional tools and equipment used by sea-farer and fishermen throughout the ages. It is worth exploring and getting an insight into a slowly-disappearing way of life.

The Museum also hosts a collection of preserved crabs, fish and shells of the Adriatic seabed as well as an amphora from the Roman period.

The Island of Hvar is a great place for enjoying local wine, snorkeling and relishing in everything that the pristine Adriatic Sea has to offer, eating locally sourced cuisine and getting to know Croatia’s ancient and renaissance history.

It is a vibrant hub full of historical heritage, cultural events, exquisite fine dining and natural beauty. It provides many opportunities for exploration while catering to every visitors’s individual interests.

Where to Sail & anchor around Hvar

Together with a brief history and interesting locations this blog will surely bring this beautiful Island a little bit closer to you.

There is only one thing left to share with you; our suggestions for top bays and coves where you can find yourselves during the day or spending the night anchored.