The Island of Vis, Croatia

Where is the Island of Vis?

Location and brief history of Vis

The farthest inhabited island off the Croatian mainland, Vis is one of the most popular sailing destinations on the Croatian side of the Adriatic Sea. Its highest point is Hum, which is 587 meters above sea level and provides a great view of the island and its surroundings.

The island’s two largest settlements are the town of Vis on the island’s eastern side, the settlement for which the island was originally named, and Komiža on its western coast.

Vis was inhabited as early as the Neolithic period. In the 4th century BC, the Greek tyrant of Syracuse, Dionysius the Elder, founded the colony Issa on the island. It was later an independent city-state and under the rule of the Liburnians.

From the fifteenth century until 1797, the island was under the rule of the Republic of Venice. During this time large settlements developed along the coastline Comisa – now Komiža and Lissa – now Vis.

The Venetian influence is still easily recognizable in the renaissance architecture found on the island. After the short-lived Napoleonic Kingdom of Italy, the island was ruled by the Austrian Empire from 1814. It maintained its Italian name of Lissa.

After the end of World War I, it was briefly under Italian rule, before it was conceded to the Kingdom of Yugoslavia. Vis was at one point the site of the general headquarters of Marshal Josip Broz Tito, the leader of the Yugoslav Partisan resistance movement.

It was briefly occupied by Italy and by the end of World War II the island returned to Yugoslavia. The island became part of the Republic of Croatia after Croatia won its independence from Yugoslavia in 1991. Due to its colorful history, the island is full of varied cultural heritage that includes Tito’s cave hideout, a British fortress and many ancient Greek remains.

Having spent much of its recent history serving as a Yugoslav military base, cut off from foreign visitors from the 1950s right up until 1989, Vis has remained sheltered from outside influence. This isolation preserved the island from development and ensured that visiting Vis feels like a trip to simpler times when nature and agriculture were the focal point of life on the island.

The City of Vis 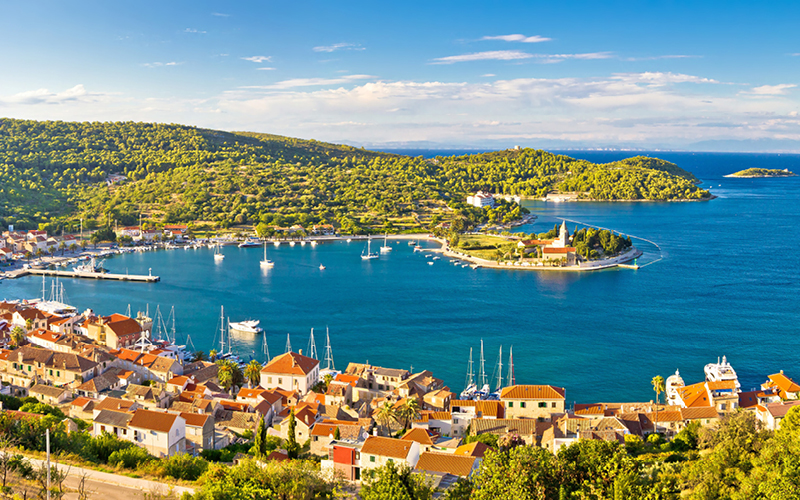 As I mentioned before, the city of Vis was originally founded as a Greek colony called Issa. It sits at the foot of a wide, horseshoe-shaped bay. Ferry arrivals give spurts of activity to an otherwise-peaceful collection of coastal promenades, crumbling 17th-century town houses and narrow lanes twisting gently uphill from the seafront.

The town is a merger of two settlements, the 19th-century Luka (meaning port in Croatian), where the ferry docks, and the medieval Kut (Croatian for corner), on the opposite curve of the horseshoe. A promenade runs scenically between the two and is lined with several small restaurants. These offer delicious local Mediterranean dishes.

If you visit them, don’t miss out on trying wine made from the Vis’ own distinct grape, vugava, a white varietal that’s been cultivated there since ancient times.

Besides the thriving local culinary scene, Vis is known for its beautiful beaches and pristine sea. Small beaches line the promenade, but the busiest town beach is located to the north of the harbor in front of Hotel Issa.

If you venture beyond it, you will encounter a series of wild swimming spots. These are easy to reach on foot but are even better explored by sailing. On the other side, past Kut and the British Naval Cemetery, is the pretty pebble beach of Grandovac, which has a beach bar.

It’s a great spot to grab a refreshing drink after soaking up the sun. If you head out to the northern part of the island you can find Stončica beach, which is one of the most attractive beaches on the island.

Diving is excellent in the waters around Vis. Fish are plentiful and there are various shipwrecks, an amphorae field and a WWII plane to explore.

However, reaching much of the best diving spots requires a degree of skill and experience. Luckily, the Issa Diving Center is there to help make your diving adventure happen.

Stiniva beach, voted one of the most beautiful beaches in Europe, is also a great diving spot with diving tours leaving Vis City on most days during the summer season.

The waters around Stiniva are shallow, which make it a beautiful and convenient spot for children to play in the sea. The uninhabited fishing huts and natural surroundings of Stiniva are protected as a nature reserve so make sure to observe its beauty in a respectful way.Hvar Cathedral, City Lodge & Arsenal 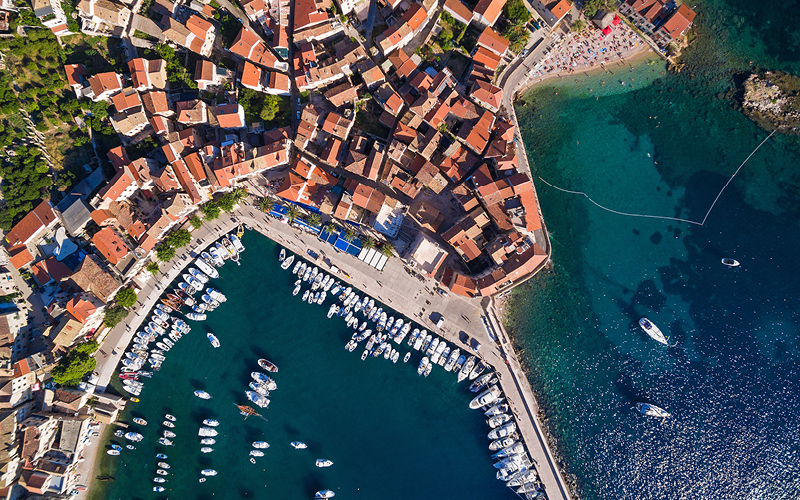 On the opposite side of the island, lies the fishing town of Komiža. It sits at the foot of Hum hill and has a west by southwest orientation. It is, therefore, protected from all the northerly winds and is subsequently the warmest place in Croatia in winter.

The archipelago of Komiža encompasses even the farthest Adriatic islands,– Biševo, Palagruža, St. Andrija, as well as Jabuka and Brusnik – islands of volcanic origin.

The town’s architecture is a testament to its long fishing tradition and each year in high season, Komiža reaches its summer peak with the celebration of the Fishermen’s Night. A traditional event which takes over the town and has been held on every first Saturday in August, since 1986. The celebration of the Fishermen’s Night is filled with song, dance and homemade delicacies.

Plan your trip to catch a glimpse of traditional festivities and enjoy all the culinary wonders the local chefs have to offer.

Sailing around Komiža provides endless opportunities for exploring the sea, the indigenous plant and wildlife and there’s even a yearly international big game fishing event held in the second week of July.

The sea around Komiža is bountiful with fish, making is an exciting location for all amateur and professional anglers. However, make sure to get a local fishing license or meet up with one of the local fishermen and get your fish straight from them! The town is filled with small restaurants which offer amazing local dishes and wines centered around fresh seafood. 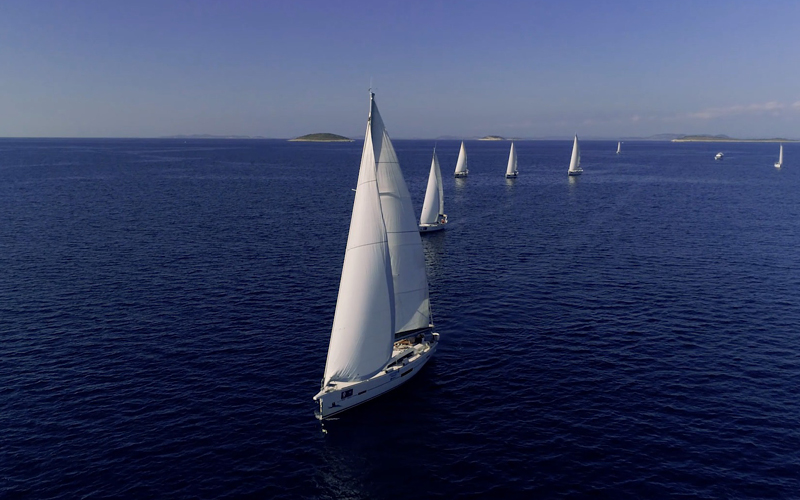 If you are planning your sailing trip for later in the year, visiting the historical regatta between Komiža and Palagruža is a must!

For centuries, the fishermen sailed to Palagruža, which is 42 nm away from Komiža, to fish sardines which were then salted in barrels on the beach over there and brought in Falkuša boats to the barracks in Komiža by the end of the fishing dark.

The Falkuša is a subtype of a gajeta, a traditional Dalmatian fishing sailboat. Its design was adapted to specific needs of Komiža fishermen, who went on long fishing expeditions in the open seas, providing them with sailing speed and enough wide space for hauling the fish back to their hometown.

Its unique traditional design is recognized as part of the UNESCO World Heritage List. The regatta is helf every year in September and ends with a big feast in Komiža. 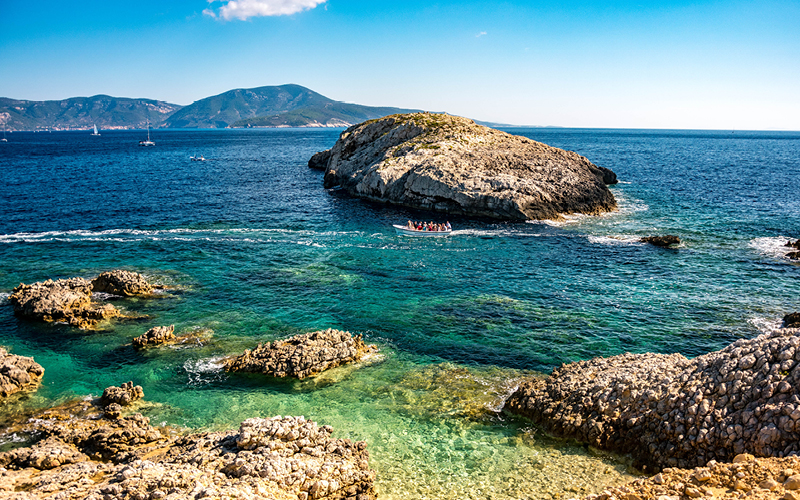 The Komiža area is known for its natural wonders and pristine, untouched eco-system. One such extraordinary place is Biševo Island.

Biševo is a small island in the Geopark Vis Archipegalo which is part of the UNESCO list of world heritage.

It is a peculiar area in the central part of the Adriatic Sea which has undergone specific geological transformations related to salt tectonics, resulting with fabulous geological structures and geomorphological features. The islands are characterized by both, the oldest and the youngest rocks on the eastern Adriatic coast, and are still growing.

The Blue Cave is one of the most popular and amazing natural wonders of the Adriatic and the crown jewel of Biševo’s natural riches. It is situated on the east side of the island in the cove Balun, about 4.5 nautical miles off Komiža.

It was discovered by Baron Eugen von Ransonet in 1884 and has been open for public ever since. The cave can be entered in a small boat through a narrow, 1.5-meter-high and 2.4-meter-wide entrance.

Sunlight enters through an underwater passage, reflects itself off the ground and provides an amazing blue-silverish glimmer. Depending on the time of the year, the best time to visit the cave is between 10 am and 2 pm.

Where to Sail & anchor around Vis

It is always benefitial to know what to visit and what to see on Hvar Island. We also wrote our answers to the question where to eat on Hvar Island. Together with a brief history and interesting locations this blog will surely bring this beautiful Island a little bit closer to you.
There is only one thing left to share with you; our suggestions for top bays and coves where you can find yourselves during the day or spending the night anchored.